Curiosity? Who has the time?

We’re constantly being encouraged to practice curiosity, to grow as people and as leaders. But do you have the time? Is curiosity a luxury most of us can’t afford? 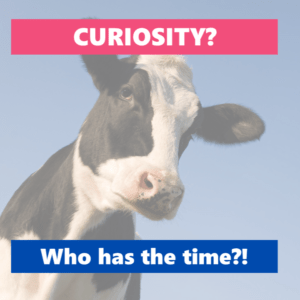 Maybe it’s just me, but while I’ve always found the idea of pursuing curiosity to be appealing – even a vital virtue for today’s rounded person – it’s been a source of constant guilt. I never read enough, I hardly ever follow through on my resolution to set aside ‘thinking time’, I’m haphazard about blogging, I still haven’t written that book … etc, etc, etc.

I recently listened to a great interview with the wonderful author Malcolm Gladwell. I say ‘wonderful’ but, to be honest, I’ve always been equally inspired and intimidated by him. He just seems so much like Renaissance Man, and I’m just so dull in comparison – and I’ve always thought a big part of that was that I don’t have time to pursue curiosity.

But perhaps I’m actually better at this than I thought – and perhaps you are too.

During a meal with friends at the weekend, we spent some time sharing recommendations for books, TV programmes and podcasts. And, to be honest, hearing myself talking about things I’d read, watched and heard since we last met, I was struck by how much there actually was. I might not have given Malcolm Gladwell a run for his money or caused much angst to J Alfred Prufrock – but I WAS sharing the fruits of curiosity with my friends.

So why don’t I think of myself as sufficiently curious? Some of it could just be honesty – I’d definitely like to practice curiosity more. But some of it is that I don’t often ‘close the circle’ on my curiosity. For me, sharing an idea with others is a key part of how I absorb it.

is quoted as saying “The best way to learn is to teach”, which was a translation of an ancient Latin saying “Docendo discimus”.

I reckon there are three elements or stages to the meaningful pursuit of curiosity:

Listening to myself sharing some of what I’d encountered recently, I realise that I HAVE been practising curiosity, but perhaps not going full circle by ‘absorbing’ and then ‘questioning’. Give me an opportunity to share, though, and I do plenty of both!

My challenge to grow in curiosity is to share ideas more, because that’s when I do most of my ‘absorbing’.

We use basic cookies to give you the best experience on this website. These do not collect or share personal information about you, but help with technical things like loading forms. No information is shared with third parties. If you continue to use this site we will assume that you are happy with it. This site uses Google fonts. Google may receive automated information about the IP address of computers which access their fonts. If this is a problem for you, please contact Google directly. OkNoPrivacy policy